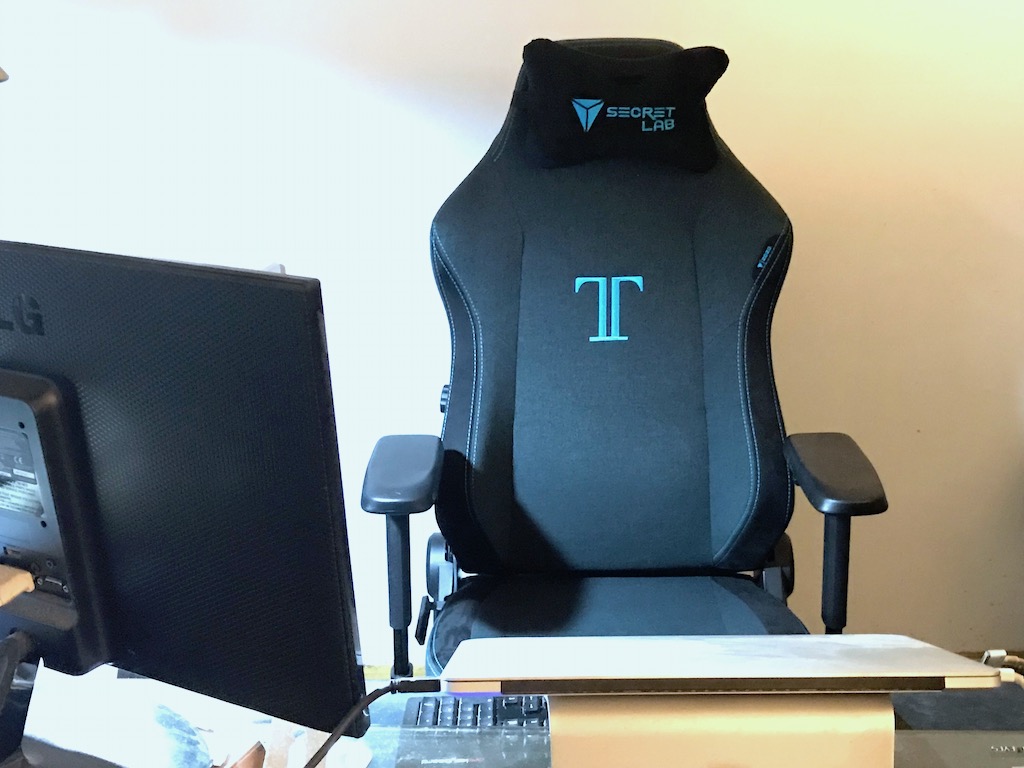 My twenty year old (!) Herman-Miller Aeron chair was falling apart so it was finally time for a new office chair. A direct replacement would run over $1000 and that wasn’t in the cards. By chance I started seeing ads online for “Secret Labs” chairs. These are “gaming chairs” - build for comfort and spending long periods of time in front of the computer. The reviews were all good and they just released an update which addressed some of the few buyer complaints. There was a $100-off sale, so I went ahead and ordered.

I went with the “Titan” which is sized for people six-feet and over. One of the issues I had with ordering an “Aeron-clone” from a place like Amazon was they didn’t look to be built for taller folks. Even the original Aeron I had felt too low.

The Secret Labs chair comes in three coverings: a tough kind of pleather, real leather, and their new “SoftWeave” fabric. I went for the fabric as I don’t like PU-leather, and real leather was kind of expensive for my current budget.

Ordering online was easy enough. There aren’t many options and there’s no weird up-sells like some online companies try to foist on you. The chair arrived two days later by FedEx Ground. I was tracking the delivery online, but the company also sent me an email letting me know the chair had been delivered. A nice touch.

The chair arrives in a pretty big box that weighs close to seventy (70) points. Horsing it in and out of the car from where I have my PO Box was a bit of a chore, but if you order and have it delivered to a PO Box, be prepared to bring a hand cart (or helpful friend) to move it around.

The box has a nice big set of assembly instructions, and they also have videos on their site to help even more. All in all it took about 15 minutes to put the chair together. It’s only 10 screws - 8 hex, and 2 Phillips - to assemble. Four hex screws mount the back to the seat, and four more mount the tilt mechanism to the seat. Two Phillips screws attach a cover panel to the cracks mating the back to the seat.

The piston to raise/lower the chair just slides into the base and the tilt mechanism. Which is kind of nice. One of the things that broke down on my Aeron was the raise/lower mechanism started to malfunction and there was no way to replace it. With the construction of the SecretLabs chair, I can order a replacement piston should the original one start to fail.

The Titan is built kind of like a racing car seat with a high back and side bolsters on the seat and seat-back. The padding is of the same variety you find in car seats too. It’s not squishy, it’s firm and supportive. There’s built-in lumbar support that adjusts with a dial on the right side.

The arm rests can be adjusted up and down, forward and back, side to side, and by camber angle. So you can get pretty much any arrangement that’s comfortable. The padding on the arm rests is on the firm side but not uncomfortable.

The chair comes with an extra neck pillow which is filled with gel. It’s covered in velvety fabric so it’s quite nice to rest your head on when you need a break.

The chair can tilt back almost 60 degrees for naps. The wheels roll very quietly. And the overall fit and finish is on par with chairs that would cost three times as much. One thing I really like is the SoftWeave fabric. A problem I’ve had with mesh and vinyl chairs is that you basically slide off of them. The fabric is also like you’d find in a car seat - it kind of grips you and keeps you from sliding down into a bad sitting position. It’s a little hot on a warm day, but much better than vinyl would be. The only downside is that the fabric does seem to be a magnet for crumbs, but otherwise it’s awesome.

The Secret Lab chair would be a bargain at full price. But when on sale it’s silly to buy a $1000 chair. Especially if you’re over 6-feet tall - most “standard” chairs are too low for taller people. I’m at my desk up to 12 hours a day and after a couple weeks using the Titan my back feels noticeably better because my posture is better in the chair.

You can order direct from SecretLab.